Raspberry Pi Model 3 into a Mac Plus case

My Raspberry Pi has been sitting on my bench in a little plastic box. It seems so naked and bare; it needed something to spice things up. And I needed another project on my list, like I am not sure what, but it has ended up on my list.

I have had an old Mac Plus case laying around for years. It has served as a desktop bookcase to recently a collecting bin for cables. The face plate was made into a cheesy, but geeky picture frame. It took some time to clean it up a bit. I didn’t go through all of the trouble to really scrub it down. I like a little of the aged, plastic, patina, look to it, but it does look scads better than it did. 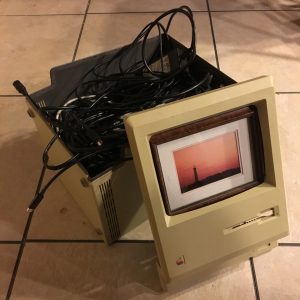 My first goal for this project is to see how much I can use that I have laying around. I have rounded up most of the parts I need.

I am sure I will need some more bits and parts as time wears on, but for now this will get me started.

While working on getting the screen working with the Pi (what a pain, but this will be another post later) I have been laying to how to put things together. The first order of business was the screen. I was trying to find a 4:3 aspect monitor, but didn’t like what I found. I started looking at the Raspberry Pi “compatible” screens. I originally wanted to get the larger 8″ screen, but after measuring a couple of times, I was sure it wouldn’t fit. So I decided on the 7″ screen.

I need a way to mount the screen to the inside of the face plate. What to use? It took me a day or so of rummaging around to find something that seemed appropriate to use. Somewhere in my travels I had a rather large pass-through card, but the right size for holding the screen and with a little Dremel work on the connectors it fits in the face plate. 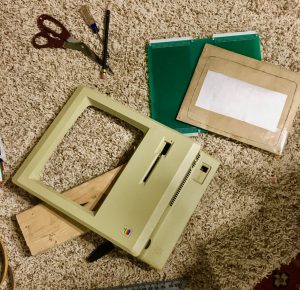 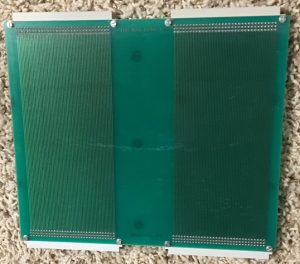 I took a piece of cardboard and traced the outline of the screen opening on the faceplate. I then added another piece of paper representing the screen to help figure out the placement of it and the screws.

I have to drill the holes in the plate to attach it to the face plate as well as 4 more holes to mount the screen. 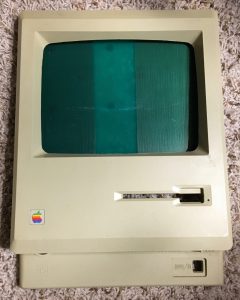 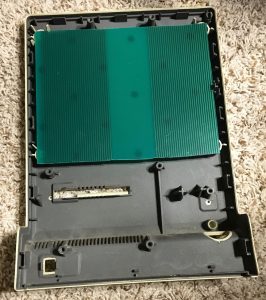 Well, that is it for now. Check back as I will be updating as I keeping plugging along on this one. Like I said it is a side-project. While not pretty, the bare Pi and VNC work fairly well for the work it currently does, but it deserves a nice Macinficantion.